Tesla has reportedly started testing a new feature for its fleet: the ability to connect to ISP provided Wi-Fi networks.

Connectivity is an integral part of the Tesla experience, enabling vehicles to receive software and navigation updates periodically, access entertainment options, as well as allowing the company to receive valuable data collection from the fleet, used to improve features such as Autopilot.

Although Tesla initially provided a free internet connection, as the fleet developed, the company began to require a new paid Premium Connectivity package for a monthly subscription in order to access some of the most data-intensive services, such as streaming music and video. Tesla owners have had to pick whether they want to pay $10 per month for premium connectivity since then.

Regardless of whether you pay for Premium Connectivity, almost all features are available for free on Wi-Fi.

The automaker has also continued to look for alternative solutions for their customers, including a recent software update that allows owners to use their phones’ as hotspots while driving as a substitute to the connectivity package.

“New Upcoming #Tesla feature: Free access to public hotspots from, AT&T, Comcast, Orange, and more! Since late last year, there have been hints in the firmware that @Tesla was looking to support “Public Hotspots”. been able to enable this feature, and confirm it works!”

He continued to provide more information regarding the feature in subsequent tweets: “First off – for this to work, Tesla needs to enable the feature on your car. Once enabled, your car generates a TPM-based private key for use on these Wi- Fi networks.

After that, you can just select the relevant network and the car will negotiate a connection! On the backend, the firmware refers to Tesla’s Product Partners Issuing CA for authentication purposes, indicating that this feature stems from an upcoming partnership”

Although these networks are often open to the public, connecting to them usually requires the customer to be a subscribe to the particular ISP.

Tesla is partnering with the internet providers directly giving you the ability to seamlessly connect to these networks without having to provide credentials.

These networks can sometimes be fickle, but Tesla will have the ability to white-list or black-list individual networks based on the location of your car and whether the vehicle was able to sucessfully connect.

For owners without Premium Connectivity, this will them more locations to stream music and video while potentially waiting, while charging or waiting for someone near shopping areas.

Even more owners who subscribe to Premium Connectivity, this will give everyone more locations to download software updates, which are usually limited to Wi-Fi.

According to Elon, Superchargers will also receive Wi-Fi connectivity in the future, giving owners even more access.

The ability to connect to ISP provided Wi-Fi access points will be a very well received addition to the Tesla vehicles, as they receive even more internet-based entertainment features. 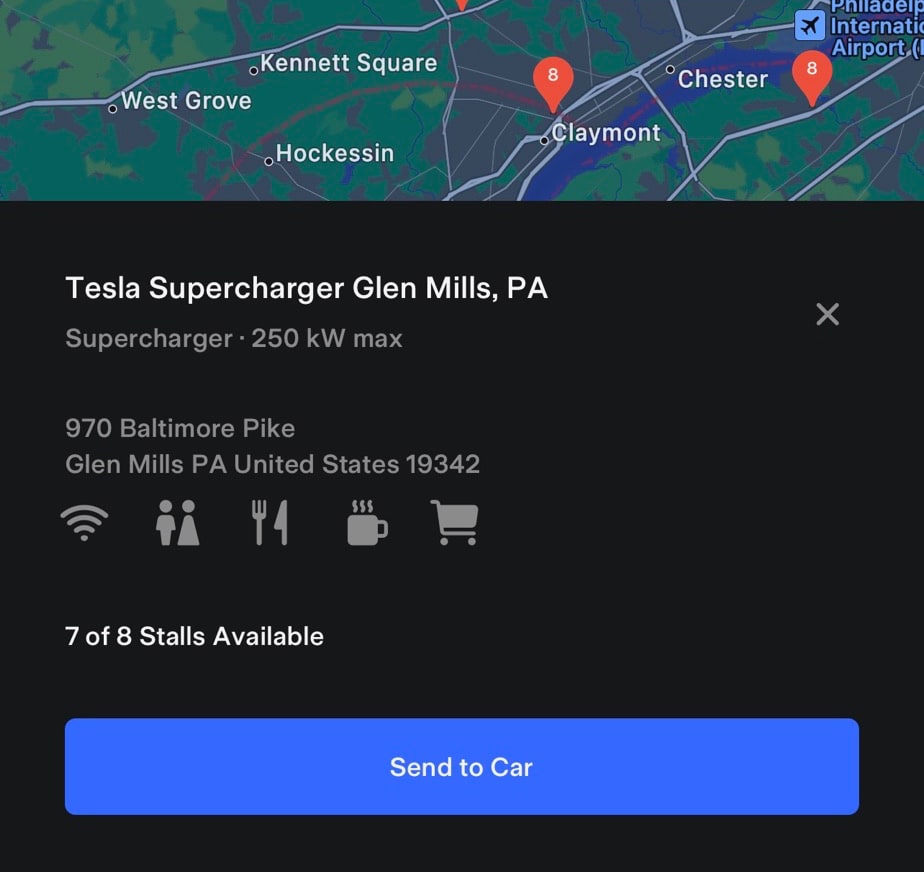 Tesla has updated their app to version 4.8. In the release notes Tesla mentions the additions of managing your lease in the app and the ability to view Tesla Solar service details.

Several changes underlying in the app hint at upcoming app features, such as supporting filtering by non-Tesla compatible chargers and the ability for the app to show your vehicle’s data without waiting for it to wake up.

The latter will be a huge improvement and will save energy by not waking up your vehicle every time you open the app.

However, there are also several improvements to the list of chargers that are displayed in the app.

The list of nearby chargers has also increased from four up to ten. 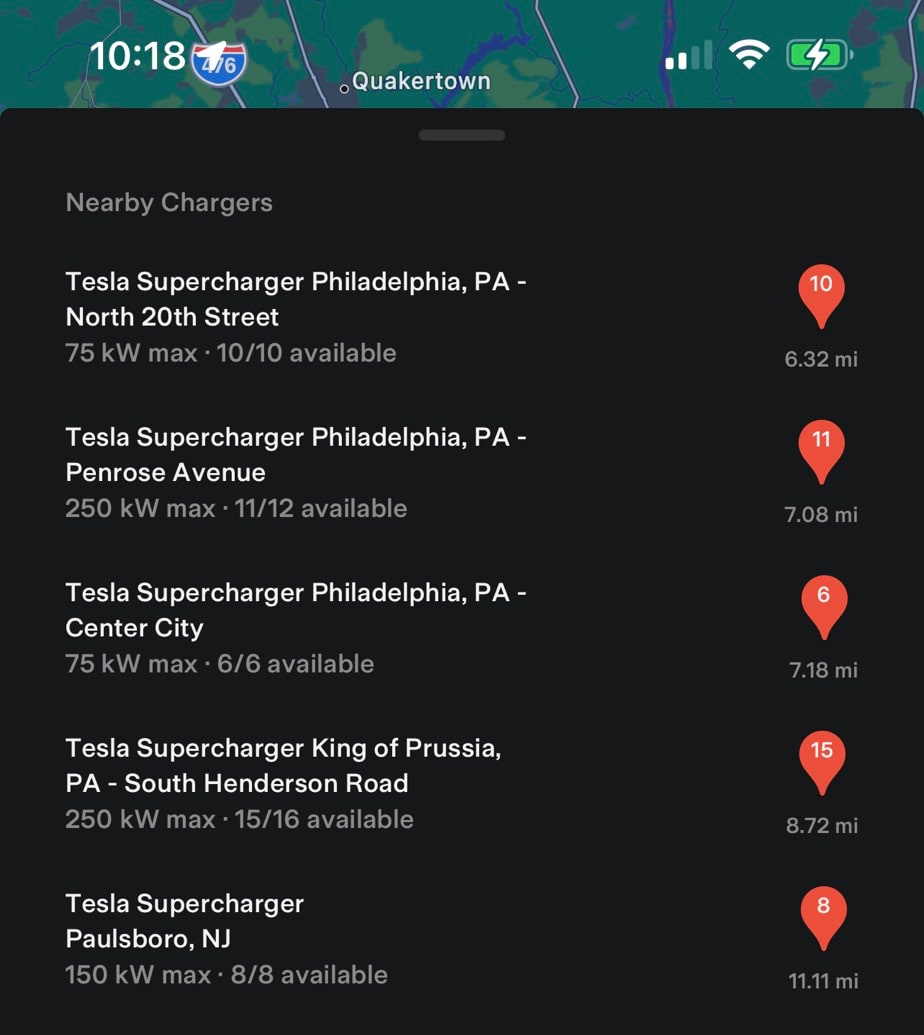 In the same list, you’ll now be able to view the maximum power output of each location, letting you easily pick between destination chargers, v2 or v3 locations.

Superchargers’ output details appear to be limited to the US at the moment, but we expect to see this expand to other regions as the data is already available on Tesla’s website.

In addition to displaying more Superchargers and showing the max output of each location, you can now also tap any location to view more details about a specific Supercharger.

Similar to the data shown in the car, the app will now display additional information about each charger, such as the address of the Supercharger and nearby amenities, such as Wi-Fi, shopping, restaurants, and more.

Unfortunately, not all Supercharger information that is displayed in the vehicle is shown in the app yet. The obvious two omissions are the price per kW and idle fee information.

This update should make choosing a charging location easier and we hope to see this available in other regions soon. 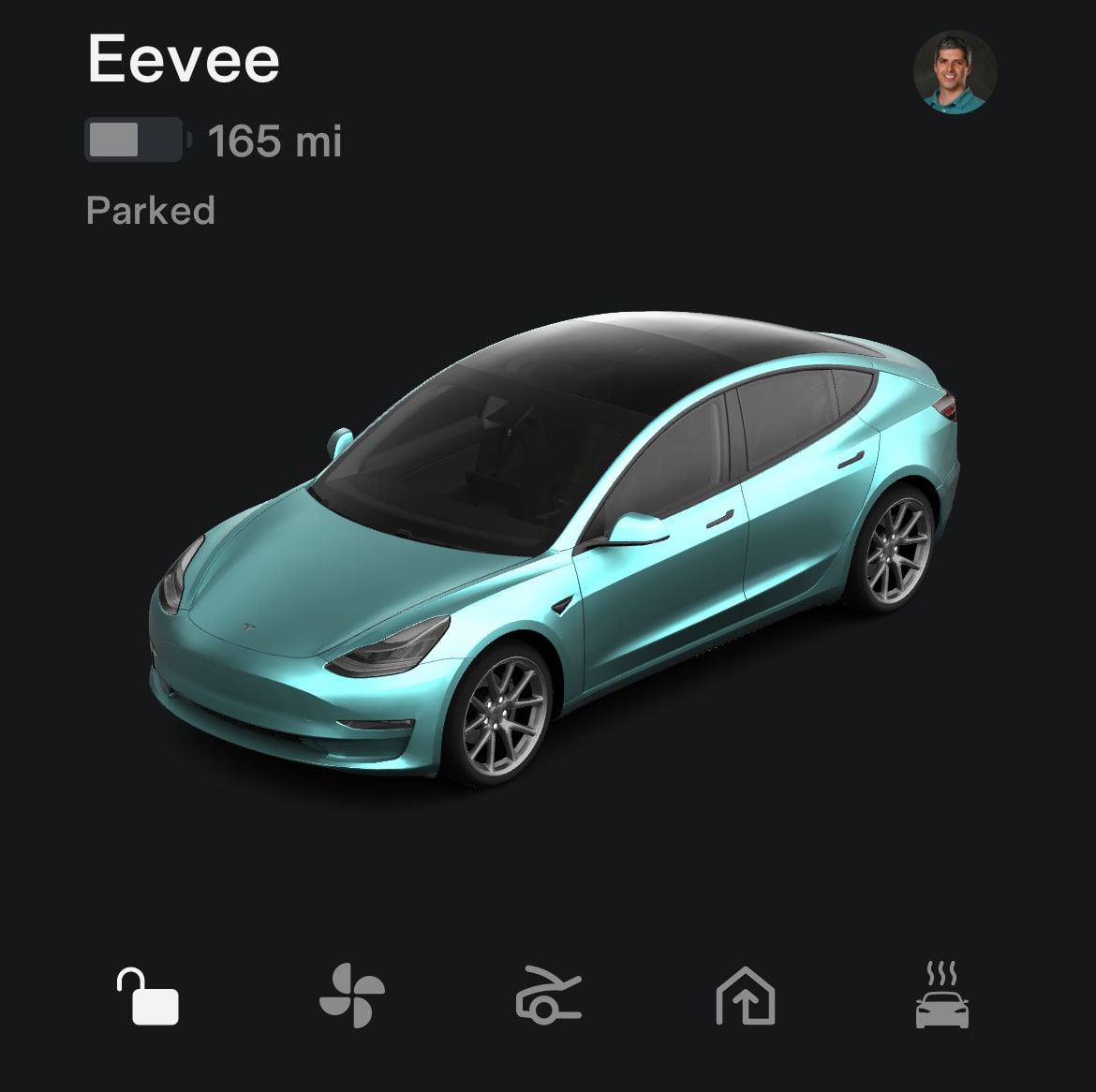 Today Tesla updated their iOS app to version 4.8. In this update Tesla added back the ability to manage your vehicle’s lease.

Tesla also introduced the ability to view the status and updates for service requests related to Tesla energy services.

However, there were several other underlying changes to the app for features that are currently in development.

Tesla now allows the ability to charge compatible non-Tesla vehicles at select Superchargers in some regions (why this is a smart move).

However, the Superchargers list displayed in the app currently doesn’t offer a way to filter by non-Tesla compatible stations. It appears that Tesla will soon offer this as a feature in the app.

Another feature that Tesla is working on is the ability to transfer car ownership directly in the app. This feature will arrive in a future update, but some of the underlying code is already there.

However, agruably one of the biggest features to the Tesla app appears to now be under development.

In the future, the Tesla app may be able to instantly display information about your vehicle. If this development comes to fruition, you will no longer have to wait for your vehicle to wake up before being able to view the car’s range or state of charge. This information will be displayed almost once you open the app.

A new API found in this update will allow the app to retrieve cached vehicle data. Your car will send information to Tesla in the same manner it does today, but it will now do it automatically before falling asleep.

This change could allow for several big improvements.

The app could use this new API to display the latest vehicle data without having to wake up the vehicle first.

This means that once you open the Tesla app, you’ll instantly have the latest battery state of charge, vehicle range, open door/window information, odometer reading and everything else, all without having to wait for the vehicle to wake up first.

This change will allow the vehicle to sleep longer, therefore reducing the vehicle’s energy consumption, often referred to as phantom drain.

When this feature is ready to go live, Tesla will likely not wake up the vehicle every time the app is opened.

Today the Tesla app is used for much more than just vehicle information. We have charging statistics, insurance informaiton, Tesla Solar, Tesla service and more.

Waking up the vehicle every time the app is opened causes unnecessary energy lose.

Since the latest vehicle data will be displayed in the app without the need to wake up your vehicle, Tesla will likely wait for the owner to issue a command, such as turning on the climate system, before waking up the car.

Having your car data appear as soon as you open the app will be a huge improvement. It’s very much a first world problem, but the instant access to your car’s information will make the app much more useful.