How many vegans, according to the joke, does it take to change a lightbulb? Two: one to change it and one to check for animal ingredients. It’s funny because it contains a kernel of truth. Everyone evidently knows that vegans seem obsessed with reading ingredient labels. But less well known is the definition of vegan in its entirety and whether it constitutes a lifestyle or merely a diet.

What is the definition of a vegan?

Vegans—people who do not consume anything that comes from an animal—have been around for thousands of years. The Therapeutae, for instance, were an ancient Jewish sect that abstained from all animal foods, and the philosopher and poet Abū al-ʿAlāʾ al-Maʿarrī (973–1057) avoided animal products and wrote “do not desire as food the flesh of slaughtered animals / Or the white milk of mothers who intended its pure draught / for their young, not noble ladies.”

But the word vegan was not created until 1944, when six members of The Vegan Society gathered in England and coined it from the first and last letters of д. According to The Vegan Society, “The group felt a new word was required to describe them; something more concise than ‘non-dairy vegetarians.’ Rejected words included ‘dairyban,’ ‘vitan,’ and ‘benevore.’”

The Vegan Society’s definition of a vegan describes it as “a philosophy and way of living which seeks to exclude—as far as is possible and practicable—all forms of exploitation of, and cruelty to, animals for food, clothing or any other purpose; and by extension, promotes the development and use of animal-free alternatives for the benefit of animals, humans and the environment. In dietary terms, it denotes the practice of dispensing with all products derived wholly or partly from animals.”

As that definition, veganism is not just a diet; Indeed, for ethical vegans, it means not supporting any product or enterprise that exploits animals, from drugs that are tested on animals to zoos and aquariums that keep them in captivity. With such an ethic in mind, many vegans regard it as their obligations to speak out for animals by sharing with friends, family, and the public information regarding how animals suffer for food, fashion, experiments, entertainment, and more.

With the increasing popularity of veganism, however, has come an even more holistic and compassionate approach to defining what a vegan is. There is a growing movement that believes that the unity of suffering connects species, races, genders, classes, and religions in a very tangible way—that the exploitation of animals is intrinsically linked to the discrimination of humans in its many forms (such as racism , sexism, ableism, and sizeism). For those within this movement, being vegan means advocating for and amplifying the voices of marginalized people as well as animals.

What is the difference between vegan and vegetarian?

The main difference between vegan and vegetarian is that vegetarians do not eat meat and vegans do not eat anything that comes from an animal: meat, dairy, eggs, and honey. Vegans also do not wear or use other animal products, including leather, wool, silk, feathers and down, and beeswax, and they avoid products tested on animals, such as cosmetics and drugs (although the consensus is you’re still vegan if you take necessary medications, whether they’re vegan or not, including the COVID vaccines).

Clearly, veganism is a stricter lifestyle choice than vegetarianism, and the vegan movement has given rise to several subsets that go beyond the baseline of avoiding animal products.

What is the difference between plant-based and vegan?

More and more, “plant-based” is being used as a synonym for “vegan,” especially in food marketing. Are they really the same? No. A plant-based diet consists primarily of plant foods, but a vegan diet completely excludes anything that comes from an animal. So, while “plant-based” might include ingredients like eggs, dairy, honey, or even a little meat, “vegan” means the food is entirely free of animal products. Moreover, veganism is a lifestyle, and vegans are likely to extend this to other aspects of their lives, including not wearing anything that comes from an animal or using products tested on them. 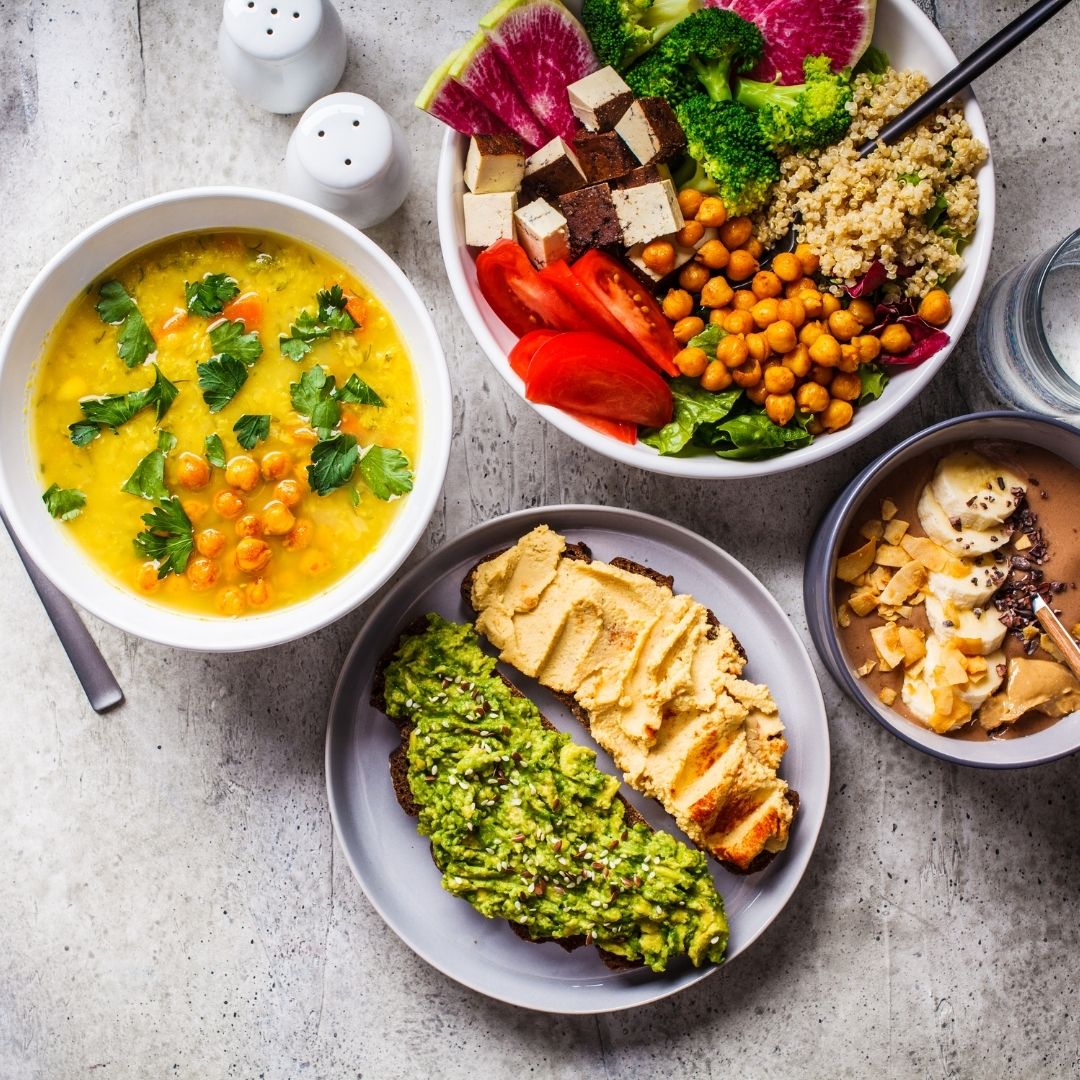 What are the health benefits of being vegan?

Many people today say they went vegan for their health. Indeed, both the American Academy of Nutrition and Dietetics and the British Dietetic Association acknowledge that a well-planned vegan diet is suitable for every age and stage of life. More specifically, a vegan diet rich in whole foods provides the following benefits.

1Good for your heart

According to research published in the Journal of the American Heart Association, diets that focus on nutritionally rich plant foods can give young adults a healthier heart, lowering their risk of cardiovascular disease by 52 percent. The 32-year study found that even participants who shifted to a plant-based diet as they aged gained heart-protective benefits, regardless of the quality of their original diet. The nutrients found in plant foods have been shown to reduce oxidation, lower inflammation, decrease low-density lipoprotein cholesterol levels, and improve other health outcomes associated with lower heart disease risk.

A study by researchers at Oxford University showed that vegans have a much lower risk of getting some forms of the disease. The 15-year-long study followed 61,647 British adults, of which 18,298 were vegetarian and 2,246 were vegan. They found that overall cancer incidence—compared to meat-eaters—was 11-percent lower in vegetarians and 19-percent lower in vegans. These findings correspond with numerous other studies looking at how diet affects cancer risk, including another one from Oxford University that analyzed data on more than 470,000 Britons and found that people who don’t eat meat have a 14-percent lower cancer risk.

3Associated with a lower risk of developing Type 2 diabetes

It seems that every day new research outs some health benefit of eating vegan. Among the latest good news is that a healthy, whole foods, plant-based diet is linked to a lower risk of developing Type 2 diabetes, which currently affects 450 million people worldwide. The study, carried out by the Harvard TH Chan School of Public Health, involved 10,684 participants and sought to identify the benefits of different plant-based diets and explore possible connections developing between this and the risk of Type 2 diabetes, the most common form of the disease. Lead author of the study Professor Frank Hu said that “consumption of polyphenol-rich plant foods like fruits, vegetables, coffee, and legumes are all closely related to a healthy plant-based diet and lower risk of diabetes.”

4Good for your blood pressure

Studies show that following a diet rich in plant-based foods during midlife is associated with a significantly lower risk of cognitive impairment—including Alzheimer’s disease—later in life. Research on plant-derived antioxidants, for instance, finds they reduce the damage caused by oxidative stress to central nervous system integrity, thereby protecting cognitive ability. Meanwhile, the phytochemicals present in fruits, vegetables, grains, beans, and other plants have been found to reduce the neuroinflammation that can contribute to dementia.

A low-fat vegan diet improves joint pain in patients with rheumatoid arthritis, according to a study conducted by researchers at the Physicians Committee for Responsible Medicine. Rheumatoid arthritis is a common autoimmune and inflammatory disease that causes joint pain, swelling, and eventually permanent joint damage. Certain foods, such as red meat and dairy, cause inflammation, which may make arthritis symptoms worse. A diet based on plants, however, can reduce or even eliminate arthritis pain.

What are the environmental benefits of being vegan?

Going vegan is not only good for the animals and your health—it’s good for the planet. “A vegan diet is probably the single biggest way to reduce your impact on planet Earth, not just greenhouse gases, but global acidification, eutrophication, land use, and water use,” says Joseph Poore of the University of Oxford and lead researcher on a 2018 report on food production. “It is far bigger than cutting down on your flights or buying an electric car,” he said, because these only cut greenhouse gas (GHG) emissions.

A growing list of experts agree that adopting a plant-based diet is crucial in the fight against climate change. According to a report from the United Nations’ Intergovernmental Panel on Climate Change, a global shift toward plant-based diets rich in pulses, nuts, fruits, and vegetables could lead to a substantial reduction of GHG emissions as compared to current dietary patterns in most industrialized countries. Another report found that 57 percent of global GHG emissions from food production come from meat and dairy products—twice those of plant foods.

Clearly, switching to a vegan diet may be the most important step humanity can take to ensure the future of our planet.

For additional resources, check out the VegNews recipe page and our guides to vegan beer, milk, cheese, and much more.

For more about veganism, read:
How to Get Iron on a Vegan Diet
10 High-Protein Vegan Recipes
The 7 Health Benefits of Not Eating Meat

Get FREE vegan recipes delivered to your inbox by signing up for our award-winning VegNews Recipe Club.

Get FREE vegan recipes delivered to your inbox by signing up for our award-winning VegNews Recipe Club.